Commandos stormed the Jewish centre where hostages were held.

Indian commandos stormed a Jewish Centre in a residential building in Bombay and continued to comb through two luxury hotels, releasing dozens of trapped foreigners, as they closed in
on the last few militants inside.

Shortly after dawn, The Times saw an Indian air force helicopter dropping 17 commandos on the roof of Nariman House, which contains a Jewish centre where militants are thought to
be holding several hostages, including Israeli citizens.

Snipers in buildings across the road peppered Nariman House with bullets as the commandos were lowered. Earlier, at least six trucks of soldiers were brought in to surround the
building, which houses the local headquarters of the ultra-orthodox Jewish group Chabad Lubavitch.

“It’s the final clean-up, we hope,” one senior police officer at the scene, who declined to give his name, told The Times.

As gunfire crackled in the air, a few hundred metres away, police struggled to keep back a crowd of several hundred Indian onlookers, while hundreds more watched from the balconies and
roofs of surrounding buildings.

Firemen unravelled a hose pipe in the narrow lane leading to Nariman House as smoke was seen coming from one of its windows.

Peter Keep, a Briton who lives near the Taj Mahal Palace hotel, watched the commando operation from the outset.

“At about 7.30am, commandos abseiled from a single helicopter that made several visits to the building,” he told The Times. “I counted 15 commanders coming from the helicopter at
one time.

“At about 7.55am, we heard shots and a series of explosions. A gun battle has been taking place on and off since. Sometimes it’s been very intense,” he said.

“At one stage the commandos measured out a rope – it looked like they were preparing to abseil down the building.

“I understand that the gunmen are on the second and third floors. The windows of the fifth floor are all broken,” he added.

“There have been some movements at the windows, but we haven’t seen any sign of any hostages.”

There were conflicting reports about the number of hostages inside, with police initially saying there were none, but other officials saying 10 Israeli citizens are being held by at
least three gunmen.

The Israeli embassy, which has said there were 10-12 Israeli citizens among those trapped or held in Bombay, denied any Israeli forces were involved in the assault.

Last night, seven people were rescued from the building, including the two year old son of Rabbi Gavriel Noach Holtzberg, the main representative at the Jewish Centre.

A cook at the centre told an Israeli newspaper how she escaped with its director’s two-year-old son.

Sandra Samuel, 44, told Haaretz she had barricaded herself in a first-floor room for 12 hours after the gunmen entered the building and only looked outside when she heard the cries
of a small child.

“I just grabbed the baby and ran out,” said Mrs Samuel, adding that the centre’s caretaker Zakir Hussein, 22, who had been hiding with her, escaped with them.

It was unclear if Rabbi Holtzberg was still there.

During the night, a militant inside the building telephoned a television channel to offer talks with the Government in exchange for the release of hostages. He complained about
Indian abuses in Kashmir.

Meanwhile, clean-up operations continued at the nearby Taj and Oberoi hotels with security officials saying there were still several several militants and civilians inside both.

Helicopters were seen circling over the Oberoi, from where around 40 people, many of them foreigners, were seen emerging this morning.

Another 93, mostly foreigners, were evacuated around midday.

The guests, including one carrying a baby, were ushered on to waiting minibuses by police before being driven away.

“I think we should be able to mop up the operation very quickly,” said J.K. Dutt, director general of the National Security Guards (NSG), which is leading the operation.

At the Taj, one police official told reporters mid-morning that there were two to three militants and 12-15 civilians inside the 105-year-old waterfront building.

Lieutenant General S. Thamburaj, who heads the southern command of the Indian army, told reporters around midday that there was at least one gunman with two possible hostages in the
Taj.

“It is confirmed that there is contact with one terrorist as of now. He is moving between two floors,” he said.

“We heard a sound of a lady and a gentleman so it is possible that this terrorist has got two or more hostages with him.”

He added that two militants had been killed in an exchange of fire in the Taj last night.

“As of now, almost all the guests in the hotel and the staff have been evacuated,” he said, predicting that security operations would be wrapped up in “hours.”

Soon after he spoke, the sound of gunfire and explosions again rocked the Taj.

Ratan Tata, who runs the company that owns the Taj, said the militants appeared to have scouted their targets in advance.

“They seem to know their way around the back office, the kitchen.

There has been a considerable amount of detailed planning,” he told a news conference.

It is unclear precisely how many militants were involved in the original attack, but the number is thought to be about 20 and police say that four have been killed and nine
arrested. 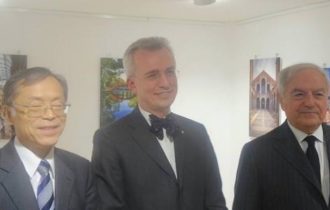 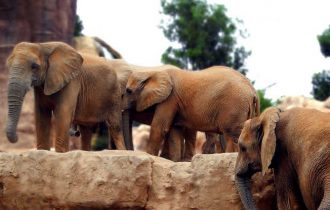 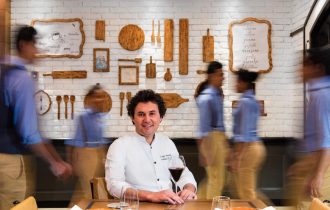