Americans flooded to the polling stations as election day finally dawned across the United States today, with the final campaign polls suggesting that the Democrat Barack Obama was on
the brink of an historic White House victory.

Long, snaking lines formed shortly after dawn outside voting centres in the battleground state of Virginia and other eastern states. Officials in New York City said that in some
neighbourhoods people began queueing up at 4 am – two hours before voting began.

But there could have been few crowds of voters in a more excitable mood than those in Chicago’s Altgeld Gardens housing project, built to house black GIs returning home after the Second
World War and the place where Mr Obama began his political career in the 1980s.

“Obama, that’s my guy!” said Laverne Flowers, 62, as she queued up to cast her ballot at the Ira F Aldridge Elementary School. “I think we’re going to make some history here,” Albert
Allen, a 48-year-old security guard, added. “This is a special day.”

The high turnout is good news for Mr Obama, who is hoping that a record number of Americans will respond to his message of change and elect him as the country’s first black president.

But his opponent, the Republican senator John McCain, embraced the underdog role and vowed to fight for every last vote. “The pundits have written us off like they have before,” the
Vietnam veteran told supporters in Roswell, New Mexico, yesterday. “They may not know it, but the Mac is back. We’re gonna win this election.”

A record 29 million voters have already cast their ballots and pollsters say the final figure should exceed 130 million. The high turnout was already causing technical problems this
morning as polling stations – especially in black areas – struggled to cope with demand.

Mr Obama was also among the early voters in Chicago, casting his ballot in a school gymnasium alongside his wife, Michelle, and daughters Sasha and Malia. “The journey ends, but voting
with my daughters, that was a big deal,” the 47-year-old told reporters.

The longest and, at a billion dollars, costliest presidential battle ended with Mr Obama the hot favourite. A USA Today/Gallup poll published yesterday gave him an 11-point lead over Mr
McCain, by 53-42 per cent.

Other polls gave him a significant lead in the critical swing states of Ohio and Pennsylvania and a slight advantage over Mr MrCain in Florida, which has 27 electoral college votes on
offer.

Victory in any one of those states would be enough to push him over the 270-vote threshold and into the White House but Karl Rove, the Republican strategist credited with masterminding
George W Bush’s two victories, predicted that the Democrat could win all three. His analysis suggested an Obama victory by 338 votes to 200, the biggest margin since Bill Clinton’s
second victory in 1996.

In the eye of the worst financial storm since the 1930s and with American troops embroiled in wars in Iraq and Afghanistan, both candidates have vowed to restore the frayed
self-confidence of the world’s only remaining superpower. The Democrats are also targeting big gains in the Senate and House of Representatives, which would see a major political
realignment on Capitol Hill.

Mr Obama’s campaign was overshadowed last night when he announced the death of his grandmother, Madelyn Payne Dunham, who died of cancer in Hawaii on Sunday at the age of 86.
“She’s gone home,” the candidate said, tears running down both cheeks as tens of thousands of rowdy supporters at the University of North Carolina-Charlotte grew silent.

Mr Obama explained to the North Carolina audience how Ms Dunham inspired his campaign by her lifetime of hard work and sacrifice. “In just one more day we have the opportunity to honour
all those quiet heroes all across America,” he added. “We can bring change to America to make sure their work and their sacrifice is honoured. That’s what we’re fighting
for.”

He would have been buoyed this morning by the very first result of the day, from Dixville Notch, New Hampshire, where, as is the tradition, voting began on the stroke of midnight and
was over in just a few seconds.

The township had not backed a Democrat for 40 years – not even Bill Clinton in the 1990s – and was held twice by George W Bush. But its voters backed Mr Obama over Mr McCain by 15 votes
to 6.

Experts say that the early vote tally also suggested an advantage for the Obama campaign, with official statistics showing that Democrats voted in larger numbers than Republicans in
North Carolina, Colorado, Florida and Iowa. All four states voted for Mr Bush in 2004.

Mr McCain, the four-term senator from Arizona, made a frantic dash yesterday several traditionally Republican states still not securely in his camp or even leaning to Mr Obama.

He stopped in Florida, Virginia, Indiana, New Mexico and Nevada and once again passed through Pennsylvania, the only state that voted Democratic in 2004 where he still hoped for a win.

Continuing with the theme of his recent campaign, he sought to raise fears among voters that the Democratic nominee was outside the American mainstream, saying “Senator Obama is in the
far left lane.”

The 72-year-old addressed a raucous evening rally in Henderson, Nevada – “This momentum, this enthusiasm convinces me we’re going to win tomorrow” he told supporters – before
closing out the marathon with a rally in his home state of Arizona.

But the hard sell is not yet over. Mr Obama plans a quick campaign stop in Indiana later today before a massive outdoor rally front of the skyline in his adopted hometow. Mr McCain, who
voted this morning in Phoenix, has events scheduled in Colorado and New Mexico, before returning to Phoenix for a party at the Biltmore Hotel. 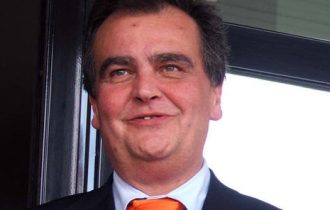