The  United  Nations  World  Food  Programme (WFP) has widened its emergency  relief  programme  in  the  occupied
Palestinian  territory  by distributing  ready-to-eat  meals  to  feed  sick  and  injured patients in hospitals  across
Gaza.  This is in addition to WFP’s normal distributions of  standard  rations  such  as  wheat  flour, cooking oil and chickpeas to 365,000
people affected by conflict and food shortages.

“The  ready-to-eat  meals  offer an immediate solution to the food needs of hospital  patients,  who  might  otherwise  go
hungry,” said WFP Emergency
Coordinator,  Gemmo  Lodesani.   “Cooking gas is still in short supply, and
without  this  intervention,  patients might miss out on a nutritious daily meal.”

In  the  coming  days, WFP aims to distribute more than 40,000 ready-to-eat meals  that  come in packages containing items such as canned meat, chicken
curry,  cheese  and biscuits.  The first tranche of ready-to-eat meals were part  of  a  donation from the Kingdom of Saudi Arabia in response to
WFP’s
“Operation  Lifeline  Gaza”  appeal.   As well as distributing the meals to
hospital  patients,  WFP  will  also  provide  them to school children as a one-off ration.

“As  each  day  passes,  we  get  closer  to reaching our overall target of 365,000  people  among  the non-refugee population in
Gaza,” Lodesani said, adding  that  products  such  as  the  ready-to-eat  meals,  and  date bars manufactured in Egypt, provided a
practical solution to the hunger needs of people affected by conflict.

WFP  is  requesting  the opening of all border crossings between Israel and Gaza,  as well as those between Israel and Egypt, to allow a steady flow of
humanitarian  assistance  to those most in need.  Under current conditions, an  average  of 70 trucks are crossing the border into Gaza each day, which is
less  than  10  per  cent  of what would be required to meet the normal commercial requirements of the people living there. 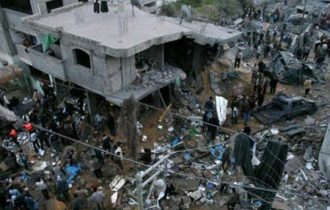