Producing electricity in Namibia on the basis of bush chips is not profitable in biomass power plants without investment aid and benefits from emission trading, this is the result of a study
conducted by the Technical Research Centre of Finland (VTT) in cooperation with Namibian specialists.

In order for electricity production from bush chips in 10 and 20 megawatt (MW) plants to be commercially lucrative, 35% of investment aid and ?15 per tonne of carbon dioxide traded in emissions
trading would be needed. Only then would the plant break even, after seven to 10 years.

There is, however, a coal-fired power plant in the country’s capital, Windhoek. According to the Finnish and Namibian researchers, converting one of its four boilers to biomass would be
profitable even without aid. Attaining a capacity of 20 MW, the investment would repay itself in seven years.

Many parts of the country in the south of Africa are overgrown with bush: 1,000 to 10,000 bushes per hectare are said to grow in the most affected area, about 10 million hectares in the
northern parts of central and eastern Namibia, amounting to five to 25 tonnes of biomass per hectare. This dense growth makes cattle rearing – the country’s primary source of livelihood –
rather difficult, as it hampers movement in those areas as well as the growth of grass for grazing.

The present study suggests that the bush could be thinned, leaving only 200 to 300 of the largest plants on the savannah. Obtaining an average quantity of 10 tonnes per hectare, the affected
area would produce a total of 125 million tonnes of biomass and thus about 500 terawatt hours (TWh).

The total consumption of energy in Namibia, however, was only 12.6 TWh in 1999, the researchers point out. Hence, using bush chips for electricity production would not only facilitate cattle
rearing, but would also contribute to Namibia’s energy self-sufficiency, as it currently imports most of its energy from neighbouring South Africa.

Bush chips are already used for firewood in Namibia. They are also the raw material for charcoal and briquette production. 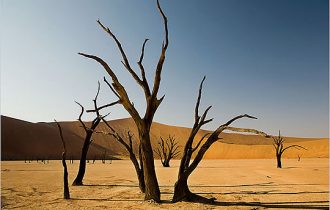 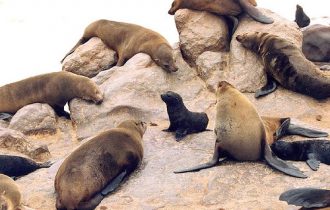